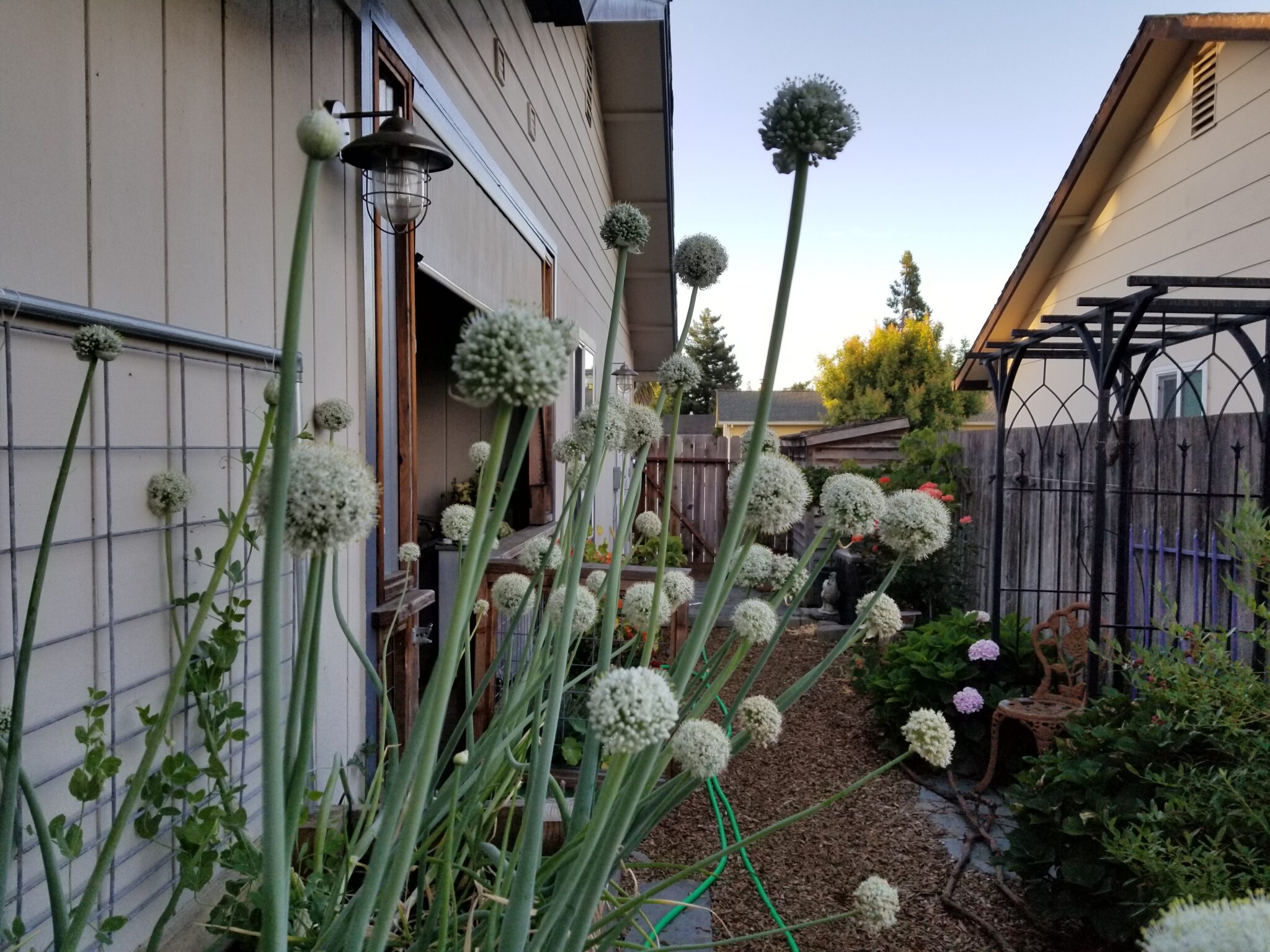 Garden Design & Evolution: A Look Back Part 2: The Side Yard

Garden Design & Evolution: A Look Back Part 2: The Side Yard has gone through the most change of all the areas in my yard. It was once very large, but a remodel on the house took a lot of that space away. I would do it again in a heartbeat, but looking at the old pictures makes me think about what I could have done with all that space. Our growing family needed the space inside though if we wanted to stay in the house. This first picture was the oldest one I could find. I am pretty sure I had taken more, since I always go overboard on everything. Unfortunately the hard drive that had all of our pictures crashed and we lost a lot. Thinking back, I don’t think the yard was much different when we bought the house. I recall higher weeds and some trash. The picture on the right shows hubby putting in the waterlines after we had cleared the yard out and put in a french drain. My old pup Ellie Mae was doing a good job monitoring his work. On the left, looking the other direction, you can see we were bringing in the fresh topsoil for the lawn. I can’t help but think we were crazy for putting in so much lawn. It didn’t occur to me that I would be stuck mowing it for years and years.

After al the hard prep work in went the lawn. It stayed that way for years being a very nice place for the pups to poop. I was hoping they would run around and take advantage of all the space, but they didn’t. The only thing they did in that yard was take the same path everyday to bark at the fence once in a while. There was a well worn path where grass never had a chance to grow. Instead it became hard adobe during the summer and a muddy path for the pups to drag into the house on their paws. I am sure many of you can relate. I will spare you having to wait until the end of this post for me to tell you our solution. Redwood chips. You can see in the pictures at the end of this post. After trying lawn and later gravel, the cheap answer was redwood chips. They were easy to pick up the poop from, they didn’t hold the smell of urine like the gravel tended to do, and they were soft on the puppy feet.

Eventually we ended up splitting the yard in half as you can see from the picture on the right. This is the view from the back looking to the front of the house. I was tired of the kids stepping in dog poop. We had trouble with the lawn being so close to the house so we took out a two foot strip and added gravel. For a long time I had roses, and tomato plants growing in large tubs there. I had forgotten that we had the arbor in that spot, with the grapevines growing over it. I had to pull up the thorn-less blackberry that was growing on the fence when we did the remodel. I was heartbroken. Little did I realize I would still have plenty off-shoots from that vine growing years later in various spots in the yard. Perfect for me to dig up and put in other places… or kill. Below you can see the view from the other side of the fence. I also added in pictures of my pups. They hated when I locked them out, but they would bolt every chance they got when the main gate was open. The little gate may have stopped them from making a run for it, but it didn’t stop the sad puppy eyes.

For years the yard pretty much stayed the same. I hadn’t realized until now that I wasn’t gardening that much for quite a long time. It makes sense though. I slowed down when I had two young boys, 16 months apart, to chase around. I spent less time in the garden and more time at Train Town, going to parks, and other family friendly activities.

The next big change to the side yard happened in July of 2012. My oldest would be starting kindergarten in the Fall. The boys were growing and fast, and our house just wasn’t big enough for two rambunctious boys. My youngest’s bedroom room was only 11 feet by 10 feet, and my oldest was only slightly bigger. The master was okay, but it easily could be improved. So the big remodel of the house began and so did the shrinking of the side yard. We ended up knocking out the side of the house with all the bedrooms and extending it out 9 feet. We left the walls of the bathrooms the same, so when the roof was extended we were able to add a private covered deck off the master bedroom. All wonderful changes, but I lost a lot of space in the garden.

In the end I wasn’t left with much of a yard and I really didn’t think I would be able to grow anything at all.

Okay, so you know that is a complete lie. Over the years I have packed so much into that small space. I have housed two bee colonies, veggies, roses, and even pumpkins. In four large garden boxes I have had so much fun experimenting with various herbs gardens, planted many pollinator friendly flowers, grew loofah and bird house gourds. The chickens absolutely LOVED hunting for bugs as I picked fresh tomatoes. This year I am very excited about the Monarch Butterfly garden filled with Milkweed, and the Swallowtail butterfly garden with parsley, dill, and fennel. The bees and chickens are gone, and as sad as that is, it just means there is room for more me to explore new things. I put out a few bee bait boxes this year. Who knows, someone may even move in.

March in the Garden 2022
Next Post:Garden Design & Evolution: A Look Back Part 3: The Backyard