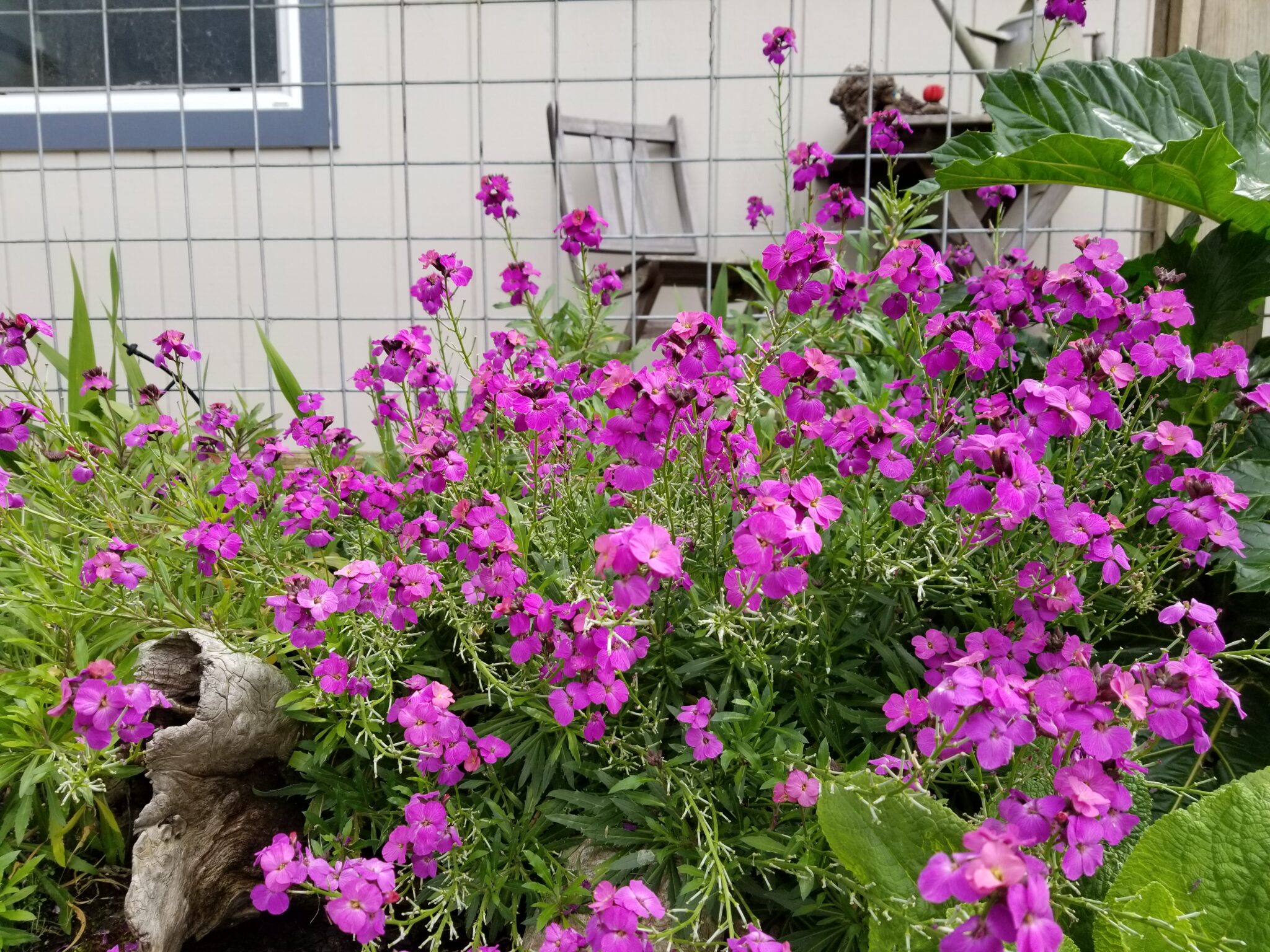 Garden Design & Evolution: A Look Back Part 3: The Backyard

You are here: Home / In The Garden / Garden Design & Evolution: A Look Back Part 3: The Backyard
April 22, 2022 by Katrina Hupfeld

Garden Design & Evolution: A Look Back Part 3: The Backyard is where I have some of the best conversations with myself.

As my family’s needs have changed over the years, the backyard has changed with it. When we first saw the house, there was a huge shed in the corner just off the family room door, a large pine tree of some sort on a small hill, and the rest was prickly weeds and junk. Thankfully we asked that the shed be removed before we closed on the house, so I didn’t have to deal with getting rid of that. I have to be honest. I really didn’t want to buy the house in the first place. It was all original 1970’s on the inside and weeds on the outside. Everything was worn out, covered in cat pee, or had a thick layer of grease and dust. I felt dirty just walking onto the property.

We stayed in our rental a full month after we closed on the house, and in that time we came over every day after work and clear out the house. We gutted the kitchen, ripped up carpets, and painted the entire interior. Everything we could do ourselves in the short time to make it livable. Somehow we pulled it off, all while planning a wedding at the same time. We got the keys to the house June 30, 2004, and were married July 30 of 2004. I can’t even imagine doing that now. After a year of working on the inside, in the summer of 2005, we turn our attention to the backyard.

I always laugh when I think about the pine tree that you can see behind the umbrella. We thought it was a pretty tree on a little dirt hill. For a few years we planted shade loving plants in it with beautiful flowers. They would do well for a little while, but eventually they would all die. I thought I must have a black thumb. Turns out the dirt mound the tree was growing on wasn’t dirt at all. It was USED CAT SAND! EWW!!! I had been gardening in used cat sand the whole time. We wouldn’t learn that little detail until a few years later when we would cut down the tree and tear out the concrete patio. The picture above was taken after we had pulled up the weeds, cleared the junk, and had put in the french drains and a sprinkler system. Our plan was to put in grass for the kids and pups to run around. Below you can see the fresh topsoil and finally the grass.

Looking back on these pictures it’s odd to see how much work we put into putting in fresh sod, just to spend the next 15 years slowly ripping it all out again.

For years we enjoyed the lawn. Wyatt was born in 2006 and Cash came along 16 months later in 2008. I slowly added potted plants, a few chairs, and a little house in the corner for the boys to enjoy. I spent most of my time with family and not so much time gardening. Although, as you can see I had a few really beautiful roses I was very proud of.

As the years went on and the boys grew older, and were able to play independently, I began to garden a little bit more. We added a few plants to the perimeter of the yard and even planted a tree. We put small play houses in that very quickly were replaced by larger ones. They boys and plants grew fast. Many many hours were spent enjoying that yard.

After a few years we turned our attention to the patio that consisted of cracked concrete that was a horrible tripping hazard for everyone. I am surprised no one was seriously injured walking across it. Look at that step from the sliding door! Who thought this was safe? Try carrying a platter of food out that door. I did… and it was sketchy to say the least.

It was July 2009 when hubby and our neighbor had the most fun ripping out the concrete patio with a Bobcat. That’s my youngest, Cash, having the time of his life playing in the biggest pile of sand he had ever seen. Don’t worry, Cash was never running around when the Bobcat was working in the yard. I was still pretty much a new mom and was always overly cautious.

After a lot of work and nagging the concrete was out and the pavers went in. Hubby also built his dream outdoor grill with a beer tap for me! A fountain soon was added. I always have to have water nearby.

After so much work, we took a break from projects and enjoyed many BBQ’s with our friends and family whenever the weather would allow. Soon though the kids grew bigger and the house seemed too small for us. We either needed to move or expand the current house. After all the work we had already put into the home, the decision was easy…EXPAND!

In 2012 we took the huge jump to remodel the house. We added 9 feet to the side with all the bedrooms, giving us room to put vaulted ceilings in the master bedroom as well as add two covered decks. This took a lot out of the side yard, but added a very comfortable deck for us to hang out in, even when it was raining.

Our sweet basset, Ellie Mae, looked at those chickens like they might be fun to put in her mouth. Jethro (pictured above) would do whatever Ellie Mae did. After Ellie passed he stopped chasing the chickens and actually loved their company. One chicken in particular seemed to really love Jethro and could often be found following him around the yard.

When we got little June bug, she followed Jethro’s lead with the chickens, and for the most part left them alone.

In 2017 Another big change happened. The boys no longer wanted their play structure and it was time to get rid of it. The chickens were quite happy we had finally uncovered that part of the yard and could get to all those delicious bugs

Unfortunately with chickens came rats. A LOT of rats. When the city cleared out all the creeks by our neighborhood the rats relocated to the residential areas. We always had rats, but after that it was unbearable. The yard was full of rats, even during the day. We tried every trick in the book to get rid of them, or at least deter them, but nothing worked. In the end we had to make the hard decision to re-home my sweet ladies.

It was February 17th of 2019. I just sat down to take a break after mowing the lawn and I realized something… no chickens, no play structure, and I had time. I had time and a yard I could do whatever I wanted with. Within a few hours hubby and I had gone to the equipment rental store, picked up a sod cutter and got to work ripping out the lawn.

Soon we were mapping out all the possibilities with rocks and whatever else we could find around the yard.

Actually this was just the beginning….

Garden Design & Evolution: A Look Back Part 3: The Back Yard