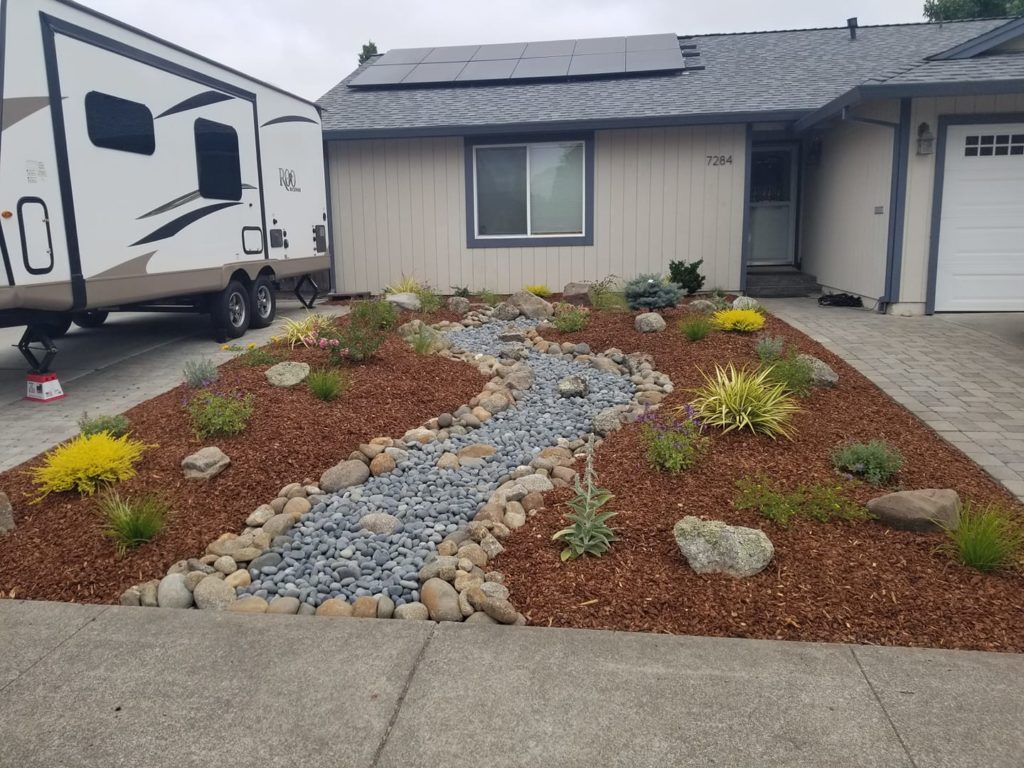 The front lawn. A vast wasteland of uninhabitable green spikes. At least that is what I thought of my front lawn. When I looked at the front lawn all I saw were hours spent mowing, and too much money spent watering it. No one played on the lawn. No critters would visit it. It was blegh. I had to change it. The quarantine was just the opportunity I needed. I no longer had to drive kids to and from school, sports, or anywhere really. We were home. All day, every day…home. It was time.

I had met with quite a few landscapers, but it was always the same. If they did show up to meet with me, they were either too expensive, or they would tell me I couldn’t have what I wanted. I wasn’t asking for a miracle, just a dry riverbed, a few little hills, and some bee friendly plants. I wasn’t asking for a zebra habitat. How was this so hard?

It was time to take matters into my own hands. Now, I love to garden, but this was a project I wanted completely done. No experiments, just a finished product. I experiment in the backyard, and that keeps me busy enough. What I really needed was for someone to come up with a plan that had the right plants in the right location, attracted bees & butterflies, and had year round interest. Simple, right? Only one designer came close to what I wanted, but they turned out to be way too expensive to execute the plan. Plus she wouldn’t even design exactly what I wanted. HILLS AND A BIG RIVERBED!! Ugh. So with her plant list and directions on where to place them I went to work doing it myself.

First step was to hire people to tear out and take away the lawn. I just didn’t want to do that. YUCK! I had set a budget of $5,000 for the project, and I didn’t hesitate for one second to spend a portion of that money on someone else do this part of the job. It took two guys four hours in the HOT sun to clear it out. Money well spent.

Now it was my turn. First things first. Using a hose I made an outline of the dry river bed. Then I made it four times bigger. Then, just because I was bitter that I was told I couldn’t have a large dry riverbed, I made it even bigger. I scoured Craigslist and found someone selling a pallet of river rocks for $250, that they had leftover from their own front yard project. I laid down some weed cloth and outlined the riverbed. I fell short a few rocks, but I was able to get more from a friend. They had them tossed off in a side yard and didn’t want them. FREE ROCKS!! Shweet.

I was also fortunate enough that another friend of mine was getting rid of about fifteen or so moss covered boulders. FREE ROCKS AGAIN! It was times like these that made me confidant that, with a little hunting through online market places, and free materials from good friends, I could do this project. By this stage in the project I was really getting fired up. Which is good, because I was going to need the energy for the next stage… 1000 pounds of Mexican River Rock. That was a rough day. But the finished product was very satisfying.

Now it was time for my berms. I was determined to transform this flat bland yard into a yard with hills and depth. It took about three yards of fill dirt to achieve this. That’s three trips to the landscape materials yard getting one yard at a time. I actually didn’t mind the multiple trips. I was shoveling out the dirt by myself, and the small loads made it less daunting. I think if I had the fill dirt delivered I would have cried at the mere site of the huge mountain of dirt that needed to be shoveled. The multiple truck loads were mentally easier to handle.

In the end it took three yards of fill dirt and three yards of soil to get the berms just right. The picture below doesn’t really do it justice, but the dirt is pretty high over the sides of the riverbed edge.

It was hard work moving three yards of fill dirt and three yards of soil, but doing it in small chunks made it tolerable. While I was shoveling the fill dirt out of the back of hubby’s truck I slowly formed the berms. This broke up the work a bit and gave me small breaks. A pleasant side effect of all this work was the wonderful conversations I had with neighbors. Often they would come out to see what I was up to and catch up on the news of the day. I even got to know a few new neighbors I hadn’t met yet.

So now the fun part. with soil and rocks in place, it was now time for planting. I had ordered the plants the landscape designer suggested and they were delivered directly to my house on a Wednesday. I mention the day for a good reason I will touch on that in a moment.

I was so thrilled to get the plants on Wednesday I wasted no time getting them in the ground. The next day I spent many hours putting in a drip system. All was going perfectly and I was so excited. I was in the home stretch!! All I had left to do was pick up a few loads of mulch the next day. this would be the icing on the cake. Unfortunately, things took a much different turn that Friday morning.

That Friday morning, instead of completing my huge front yard project, we had a fire. I had smelled smoke the night before, and hubby checked both inside and outside the house. No signs of fire or smoke. We live in Sonoma County, California… it always smell like smoke here. So we went to bed. While we slept, and for eight hours, a fire was smoldering under the house. It wasn’t until the next morning when a good Samaritan came banging on our door, alerting us to the fact that the side of our house was on fire, did we realize what was happening.

Because of the wonderful firefighters and good Samaritans, me and my family are all fine. The fire was put out and everyone is safe. What I find so amazing, and I am so appreciative of is how wonderful the firefighters were with my yard. I guess they could tell it was new landscaping so they were very careful not to stomp on my plants. Not one plant was hurt. NOT ONE!!

So a few weeks later I was back to work on the yard. Three yards of mulch later, I finally had the front yard I had dreamed of.

Quarantine Home Improvement Projects: The Front Yard. This was by far my most challenging as well as most rewarding project. It was unlike anything I had done before. It took both a physical and mental strength I wasn’t all that sure I had. But now that it is done, I can say with great pride I did it. I can also say with certainty I will never do it again. NEVER! That was ROUGH! I did come in $2000 under budget, so that’s pretty awesome. But again… never again.

Helleborus: A Fantastic Winter Plant
Next Post:DIY: How to Render Beeswax From Honeycomb