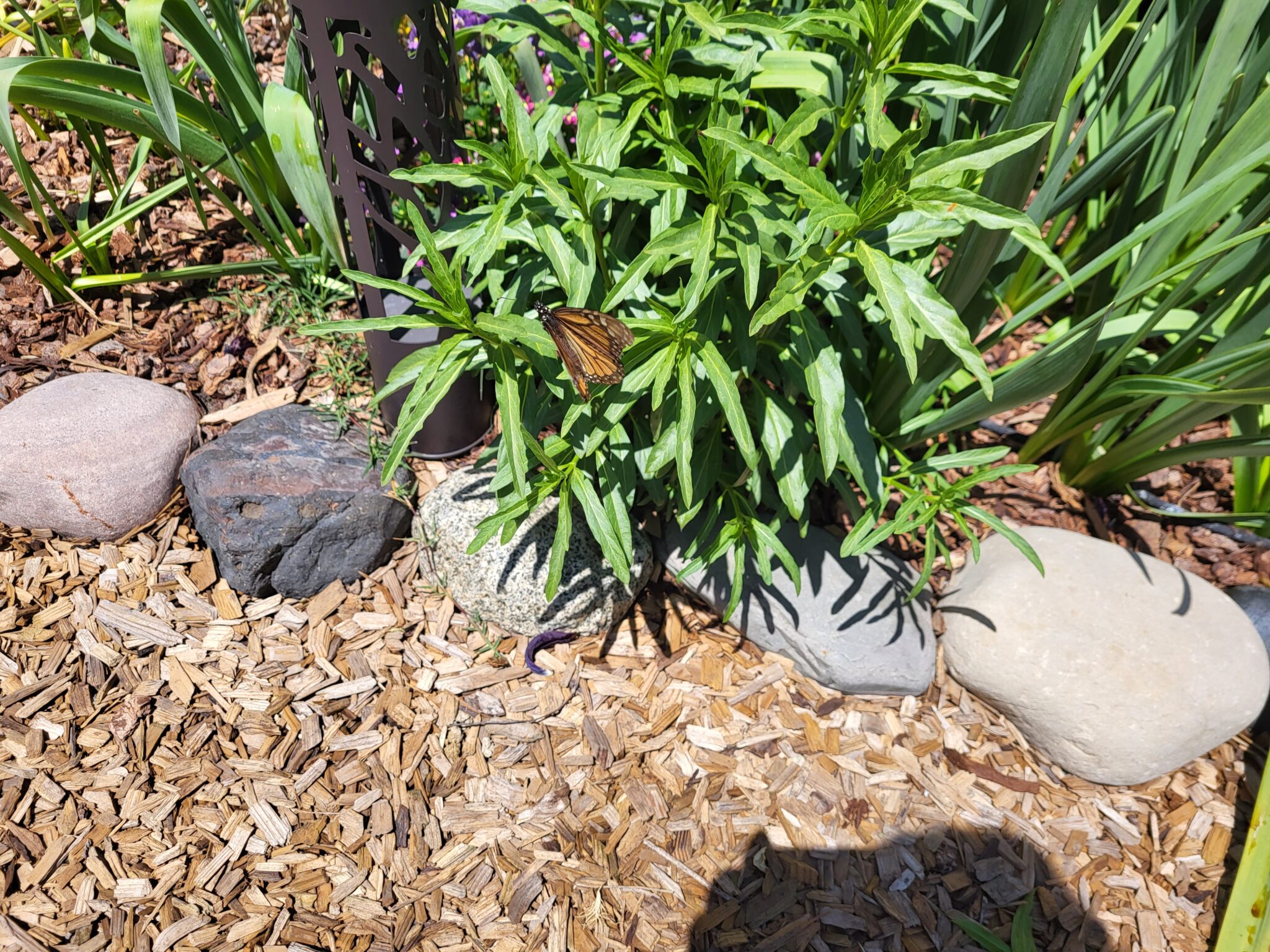 You are here: Home / In The Garden / A Monarch Returns (raising Monarch butterflies: year two, part 1)
May 2, 2022 by Katrina Hupfeld

Raising Monarch Butterflies: Year Two. To say that I was thrilled to spot a Monarch Butterfly laying eggs in the Milkweed garden is an understatement. Last year I decided to up my butterfly game and try to attract Monarch Butterflies. I looked into purchasing them online, but quickly realized they were extremely expensive for so few caterpillars. I had put the idea aside for a bit, but on a trip to the local hardware store I discovered a certain grower of milkweed had a tendency to have monarch butterfly eggs on the plants. Another bonus was one of the nursery workers in the store would mark the label of the plant as to whether or not there were eggs on the plant.

That summer I think I bought about eight plants at different times. From those plants there were about 14 or so eggs. I was able to raise them in an enclosed habitat outside on a covered deck. I am fortunate that I had the habitat outside because I just learned today that caterpillars raised indoors were less likely to migrate. Had I had them indoors my goal to have them return every year would have failed, and I wouldn’t have known why until it was too late.

After each butterfly emerged from their chrysalis, I gave them a day to dry off, then released them in my Milkweed garden hoping they would remember that was the place to lay their own eggs. To my delight they did! I hadn’t seen much activity for a week or so, but one day I was out in the garden and found a bunch of caterpillars munching away on the plants. I picked every caterpillar I could find and put them in the safety of the habitat with two fresh milkweed plants. They ate and ate, got fat, went into their chrysalis form, and emerged later as beautiful Monarchs. By mid October I released them and hoped for the best.

Then it was just a waiting game. In that time I took a few cuttings from the milkweed plants I had and propagated new plants. I cleared out a planter box and dedicated it to only milkweed in preparation for the next generation. Right now on May 2, the plants are still pretty small. Thankfully the plants in the original milkweed garden came back big and beautiful.

On April 30th I was delighted to see a Monarch butterfly fluttering from one plant to the next laying eggs. IT WAS MAGNIFICENT! It meant that I had accomplished my goal to have Monarch Butterflies return to my garden and lay eggs. I was a destination spot!

My original plan was to leave the eggs on the plants and collect the caterpillars once they are a little bigger. I wanted to be at least a little hands off. That plan was shot to heckadoodle when I learned that ladybugs eat Monarch eggs, and we currently have millions of ladybugs in the garden right now. I mean A LOT! I may have panicked a bit. I was able to collect 17 eggs. There are two yellow eggs in the picture below that I suspect are Passion Vine Butterflies. They will get their own habitat when the time comes.

It takes about four days for the eggs to hatch, so that is my report for now. I most likely will be searching for more eggs today, but I have to be careful. These guys are going to need a lot of milkweed before they go into their chrysalis form, and I need to be sure to have enough.

May 9, 2022 UPDATE– The internet said the eggs would take three to four days to hatch. On day five those lazy little bugs were still hanging out in their eggs. I did another Google search to find an answer that doesn’t make me a baby Monarch Butterfly killer. Thankfully I had found a site that said the eggs will hatch around six to seven days. For a few days I was happy. Now on day ten I need a new answer. Thankfully hubby had a very good explanation. Last year we bought milkweed plants that had eggs on them. The time it would take the butterflies to lay the eggs at the nursery, then get packaged up for shipment, then travel time to the store, and finally unpacking and putting on the shelf. All this would take longer than just three days, maybe even longer than six days. Lets just add in that it was still a few days before they hatched when I finally bout them and took them home. So in conclusion… I may still not be a murderer. That’s nice.

So here I am with 19 unhatched eggs. I hate being patient. We have had some pretty cold and windy weather, so I am hoping that would affect whether or not they hatch. I had also left a few eggs on the plants in the garden to see if there was a difference between leaving them in the wild or putting them in a habitat. So far no difference.

May 11, 2022 UPDATE – I am super excited to say that I may NOT be a murderer of tiny Monarch Butterflies. Hubby was checking on the eggs last night and said he could no longer see any eggs and there were no caterpillars. I freaked out a bit and ran to check on them. Turns out my hubby was not wearing his glasses and couldn’t see that the caterpillar eggs had black tips and were preparing to hatch. Normally I would check the internet for how long it will take for them to go from having black tipped eggs to hatching, but the information I got up until this moment hasn’t been accurate. I am going to take a very uneducated guess and say that it might have something to do with the climate here in Northern California. It’s been very cold one day then hot the next. I can only think that would affect the eggs. At this point in time there is still hope that I didn’t kill them, but I won’t know for sure until the hatch.

May 12, 2022 – THEY HAVE HATCHED!!!!! I am trying to transfer them from the old dried leaves to fresh yummy ones, but it’s hard to do when they are so tiny and you really can’t touch them. I got them the closest i could to the fresh leaves and now I am just hoping for the best. I am still waiting for some to hatch. they are in the original container still, while the hatched ones are in a different container.

Check out Part 2 of this series, After The Egg

Drought Tolerant Plants
Next Post:April in the Garden 2022